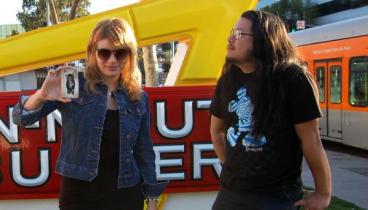 In honor of the greatest season of all, it’s time to look ahead and use songs that have already been released to bring in the summer full force. These are all tunes that have a female lead vocalist along with a lo-Fi sound, which is perfect for summer.

The first is “Feeling Ok” by Best Coast. Best Coast is one of my personal favorites.  This has been the case since I heard their album Crazy for You which featured classics like “Boyfriend”, “When I’m With You”, and the title track. While their sound has evolved from a vintage lo-fi act to a more polished, contemporary style; they still feature catchy guitar riffs and Bethany Constantino’s vocals seem to have more range than on previously recorder tracks. This song is a prime example of that.

Another band that gives off a summer vibe with their sound is Alvvays. Taking a page out of CHVRCHES book with the purposely incorrect spelling of their name, Alvvays has made their presence known in the indie scene lately. They join Mac Demarco and Purity Ring as another of my favorite bands that hails from Canada. Adult Diversion is a peppy, evenly flowing track with an equally satisfying verse-chorus combo. It also features some thoughtful lyrics which makes this band stand out to me.

Beverly-You Can’t Get It Right

Simply cannot get enough of this band. The dynamic usage of guitar featured by this group is so powerful. The parts during the bridge and in-between the chorus is where it really shines (@1:29). Drew Citron and Frankie Rose’s vocals pair together exceptionally well yet again for this track. This side project has unlimited potential and I can only hope that we hear news of another album in the works soon.